Silky, warming, and oh so comforting, curried cauliflower soup is just the thing you need to make for dinner. Did I say healthy too? It is vegan, vegetarian, dairy-free, and even keto.
Jump to Recipe Print Recipe 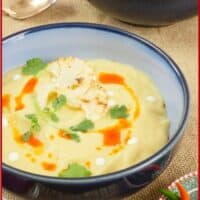 It is that time of year when I begin craving warming soups. There has been buzz about a 3-ingredient cauliflower soup for several years now—people raving about how surprisingly rich and silky a soup can be without any dairy. I’ve listened with half an ear but never attempted this supposed miracle until now. No, I am not presenting you with another 3-ingredient soup, but I can report that a soup based on cauliflower, with a few supporting flavors, can be soul-satisfyingly good. And it ticks off almost every dietary box there is with an easy tweak or two: vegan, vegetarian, dairy-free, keto, you get the idea!

When it comes to soup, my preference leans to the thick and hearty. If you want a dish along those lines, it is easy to do. When roasting the cauliflower, add in a diced potato or two. If you like texture and heft, you can also leave some of the cauliflower aside while blending and stir them back in at the end. Same with chunks of potato.

Easy curried cauliflower soup is irresistible as it is, but it can also be a canvas for a final splash of tadka, spices, and aromatics sizzled in butter. Or you can prepare some simple but spectacular company-worthy garnishes. The easiest would be to save some of your prettiest roasted cauliflower pieces for floating on top of the soup just before serving. If you want to show off, take your favorite ground red chili (I suggest Kashmiri or Deggi mirch) and combine 1/2 teaspoon with two tablespoons of oil. Let is sit for 10 minutes and then use it as a bright red drizzle.

I’ve made this dish with various liquids, and my favorite is a cup of coconut milk as a part of the 3 1/2 cups required. Chicken stock is my choice for the 2 1/2 cup balance of liquid, but vegetable stock works well if you are keeping it vegan. I would encourage you to enrich your soup with a nice dollop of cream, coconut cream, or thick vegan plain yogurt at the end. A bit of butter won’t go amiss either.