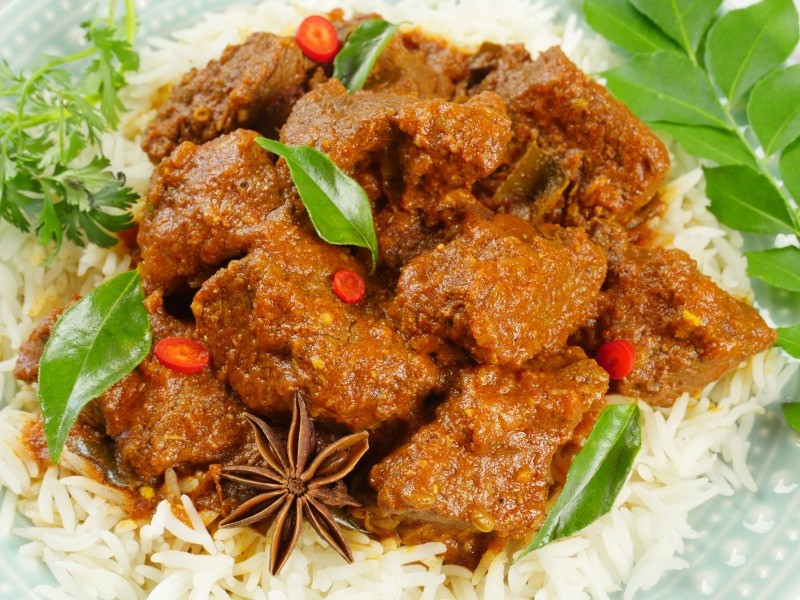 A rich beef curry redolent of cardamom, fennel, and star anise. Kerala beef curry is cooked in the instant pot for an exotic and flavorful weeknight dinner.
Jump to Recipe Print Recipe 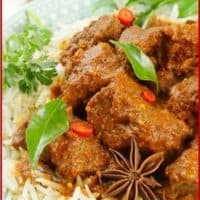 So easy and flavorful, this Instant Pot beef curry is perfect for either weeknight or weekend entertaining. While it takes about an hour and 25 minutes, you actively work on it for only 20 to 30 minutes. The most challenging part (not difficult!) is measuring the spices and chopping up the meat. On a weeknight, I sometimes serve this comforting masala over mashed cauliflower, to up the vitamin quotient.

In India, this curry is often served for Sunday lunch paired with dal, rice, roti (flatbread) or appams (a rice flour flatbread). Traditionally made with chilies and ground black pepper for quite a bit of heat, I’ve cut back on both of these ingredients since my tolerance for heat is not great. Please adjust the heat to the level you prefer.

Most Westerners don’t typically think about beef when thinking about Indian food. But there are Indian states that have enthusiastic beef eaters. Kerala, along the southwestern coast, is one of those states, along with seven states in northern India. These include West Bengal, Assam, and Nagaland. However, approximately 80% of Indians are Hindus. Besides often being vegetarian, for Hindus, the cow is a sacred symbol of life, and thus beef is not widely eaten in India.

This recipe is based on Meena Meenattoor’s Nadan Beef Curry from her delicious blog Meemi’s Kitchen. Rather than use the more common garam masala blend, she uses a specific Kerala version. This garam masala is made from cardamom, cloves, cinnamon, fennel, and a bit of star anise. There is no ground cumin or coriander, the two spices that usually act as the foundation for garam masala elsewhere in India.

In addition to reducing the chili hit, I prefer nice sized chunks of meat in my masalas. So rather than buying pre-cut stew meat, I buy two and a half pounds of chuck roast and trim it into 2-inch cubes. This leaves me with about two pounds of beef. If you don’t mind the size of stew meat found at your local butcher or grocer, you can skip this step. The big change I made is using the Instant Pot, which streamlines the cooking process without sacrificing the tempting savoriness of this curry. 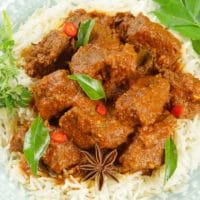