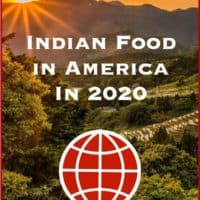 There have been 40 or more years of hope that Indian food is coming into its own here in the United States. In an article for the Southern Foodways Alliance recently Priya Krishna, food writer and author of the book "Indian-ish," noted that Madhur Jaffrey wrote in the introduction of her 1973 cookbook "An Invitation to Indian Cooking:"

Today Americans especially seem to have a great desire to experience the ‘real’ thing, an authentic taste, a different lifestyle ... It is a hopeful trend and leads me to believe that if Indian food is ever going to come into its own America, this is perhaps the time.

Jaffrey admits that she was wrong about that prediction. And even though the Indian population has grown from 206,000 in 1980 to roughly 4 million today, Indian cuisine still is not something a home cook often thinks about when they need to put food on the table. Misunderstandings about how spicy (hot) Indian food is, how complicated it is to cook, and even what a curry "is" throws up a barrier to broader understanding and acceptance.

Indian Restaurants in the U.S.

Indian immigrants to the United States are wealthier and more white-collar than many immigrants before them, so they are much less likely to run a restaurant. Historically, here in the United States, Indian restaurants were opened by owners who were needing to create a business that would support their families. But not because cooking or hospitality was the restaurantuer's passion.

So Indian buffets, a poor excuse for chai, an almost complete lack of regional representation, and the trite, almost exclusive offering of mass-produced North Indian dishes, hasn’t helped the reputation of Indian food. Not that butter chicken and korma anything can’t be delicious! It is simply that there are so many other masalas, drinks, and street foods to try.

Hopes for Indian Food in America

I am optimistic that the new wave of passionate chef-owners of Indian restaurants can help bring Madhur Jaffrey’s dreams to fruition. Success is coming by teasing at the edges of regional flavors offered in familiar forms. Take Chef Asha Gomez’s keema sloppy joes from her popular cookbook My Two Souths." Or Hemant Mathur's Indian-ish masala lamb chops and duck dosas that helped him become the first Indian chef to earn a Michelin star for the now-closed restaurant Devi in New York.

The best example of this for home cooks is Krishna’s cookbook "Indian-ish," written with her mother and published in 2019. It has been gratifying to me how well her cookbook has done and to see all the invitations she has accepted to demonstrate her mother’s favorite dishes. She can be found in the Bon Appetit kitchen making her aunt’s garlic ginger chicken, among other dishes. Krishna makes chai and a butternut squash kaddu at the New York Times. And she explains chonk (chhonk/chaunk) to the New Yorker audience. These are all easy and accessible recipes that offer some true flavors of India with a twist.

Another Cookbook to Check out

Another cookbook of note, published in 2019, was the successful "Season: Big Flavors, Beautiful Food," written by Nik Sharma. His beautifully photographed food blog was the proving ground for his food writing and he now writes for the the likes of the New York Times and the San Francisco Chronicle. I am a fan of his apple masala chai cake and his keema will brighten any meal.

Krishna’s mother swapped paneer with feta in her saag paneer-ish recipe because that is what she had. Satisfying food comes from a foundation of taste memory, adds resourcefulness in using the ingredients you have at hand, plus instinct and creativity, to come up with a recognizable but new dish. By the way, if you don’t have Priya’s cookbook, I recommend it. Her mother’s updating of aloo gobi (potato cauliflower) by roasting the vegetables rather than simmering them, transforms this standard into something I have added to my rotation of favorites.

So, we are still working on spreading the gospel of Indian food. My wish for 2020 is that more people will taste the real flavors of India, and not only fall in love with them, but begin to make their favorite dishes at home. I hope that I am a small part of this progress with our website. I am working hard to publish both more traditional and sometimes project cooking variations of a dish, as well as streamlined (sometimes Instant Pot) but still tasty weeknight recipes. It is also immensely satifying to explore regional Indian food and offer new tastes to the non-Indian audience.

Let’s hope that the New York Times' prediction for 2020 of “more interest in food from India” is a part of a continuing the trend towards not only better Indian restaurant food in America, but also more regional representation. And at the same time, more home cooks will consider making spaghetti bolognese with Indian flavors a weeknight standard.