One of the most popular Indian dishes, chicken mulligatawny soup, is full of flavor, healthy, and easy to put together. Perfect as a make-ahead or freezer meal too!
Jump to Recipe Print Recipe 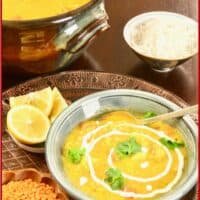 Contents Show
Anglo-Indian mashup
Delicious can be good for you!
Make mulligatawny soup your own
Glorious Chicken Mulligatawny Soup

Mulligatawny soup is one of those magical marriages of Indian flavors and British foodways that happened during the era of the East Indian company. The story goes that South Indian cooks made rasam for their English masters, which they found too thin and peppery for their liking. Some chicken was added for heft, and meat broth was added for a more recognizable meaty flavor. I am sure the ground black pepper used was mellowed out as well. Here is what the award-winning cookbook author and teacher Julie Sahni says of mulligatawny soup In her great cookbook "Classic Indian Cooking:"

“Because of its unorthodox origin, Indian cooks have had a field day exercising their creative genius with it. As a result, there are innumerable interesting variations of this soup around the world today.”

My husband and I had our fair share of satisfying meals on what is fondly called “Indian row” or “curry row” on New York City’s sixth street. The joke was that the Indian restaurants situated side by side, mostly owned by Bangladeshis, shared the same kitchen. This wasn’t true, of course, but my husband Eric still has fond memories of the mulligatawny soup he fell in love with, and which seemed to be the same, no matter which restaurant he went to on that block.

Delicious can be good for you!

I patterned my mulligatawny soup from Romain of Glebeskitchen who loosely based his soup on one from the great Madhur Jaffrey. By the way, if you haven’t visited his blog, you must. He has published many good dishes and has perfected Indian restaurant-style recipes that can be made at home. Of mulligatawny soup, he says, “Healthy. Good for the planet. Sometimes delicious can be good for you.” And I agree with him. My tweaks to his recipe were to reduce the spicing a bit and add carrot for color and sweetness. Speaking of spice levels, one teaspoon of ground pepper seemed like a lot to me, but this soup can handle it, so I suggest you go for it.

Make mulligatawny soup your own

As with chefs around the world, I suggest that you take the following recipe and make it your own after giving my template a try first. Add in some garam masala or your favorite curry powder. Throw in some other vegetables to make chicken mulligatawny soup even more nutritious, and go vegetarian or vegan if that is how you roll. This soup makes a meal with some flatbread or, as I did one night, cornbread. A fresh salad wouldn’t go amiss either. Make this soup as the main dish of a meal or as a starter or side. When you’ve settled on your favorite formula, make a big batch and freeze some for that crazy day when you need a healthy, delicious comfort food meal.

This recipe is one of the 10 dishes I make over and over! 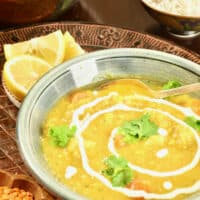 US Customary - Metric
Prevent your screen from going dark

Click here to add your own private notes.
Hungry for more?Subscribe to my free Weekly Digest!
Tried this Recipe? Pin it for Later!Mention @AlonnasIndianStove or tag #MyIndianStove!