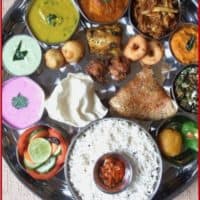 Welcome to the endlessly fascinating world of Indian food! As one of the most popular cuisines, India’s food culture is routinely shortlisted as one of the world's best. There is a wide range of curries, rice dishes, meats, vegetables, and bread, all flavored with a beautifully balanced mix of traditional spices. See my Top 20 Most Popular Indian Dishes and download my free ebook for these recipes.

The Foods of India

It is impossible in this space to describe the breadth and depth of Indian cuisine. There are so many traditions and they vary, not just from one region to another, or even from one town to another, but from stove to stove. India has over a dozen languages, 29 states, 7 union territories, 12 regions, and 35 recognized cuisines. Besides all these influences fold in caste, ethnic background, religion, and other countries' food cultures—invited or otherwise—brings a varied, joyous mix of food.

Indian cooks are passionate about good food and are masters at balancing flavors. Much time and effort is spent in shopping and preparing tempting, healthy meals. And every cook has their go-to spice mix and favored ingredients.

India, one of the few places on earth, where eating vegetarian is not a burden. In Punjab, wildly varying textures, huge selections, thrilling blends of spices, and assertive, delicious flavors are always accompanied by wonderful, freshly-made bread.

As I tell all my students, Indian cooking is all about interpretation. Each household in India will have their own recipe for the classics, and everyone will (and should) believe that their recipe is the best. I guarantee that if you go to ten different households in India, you will get ten different versions of this dish. And every one of them will be delicious in their own way. It’s what makes cooking so much fun, and gets your creative juices flowing.

The foundational ingredients of Indian cooking are rice, wheat flour, lentils, pulses, tomatoes, potatoes, onions, and dairy products. As a rule, the North Indian diet relies on wheat, and rice is king in the South.

Spices and their combinations are one of the magical aspects of this cuisine. Each region has its spice box (masala daba) with its favorite spices. There are significant overlaps in the spices used from area to area. These are the most common spices used in India: turmeric, cumin, coriander, cardamom, cloves, mustard seeds, fennel, fenugreek, saffron, star anise, and last but not least, all kinds of ground red chili pepper.

The aromatics used for many savory dishes are onion, garlic, and ginger; India’s version of the French “mirepoix” or Lousiana’s “holy trinity.”

The term garam masala typically refers to the North Indian spice blend dependent on coriander, cumin, and cloves with smaller amounts of other spices. However, all regions of India have their favorite masala or blend. If you want to make the several versions from South India, make my Kerala garam masala, or Goan masala.

Foods and cooking methods have been added to the Indian repertoire, most notably by the Mughals, English, and Portuguese. Other influences come from countries bordering India: Pakistan, Nepal, China, and Bangladesh.

Just as cooks in other countries, Indians are cooking not only beloved family recipes but are also looking for new ideas and recipes.

Foods and cooking methods have been added to the Indian repertoire most notably by the Mughals, English, and Portuguese. Other influences come from countries bordering India: Pakistan, Nepal, China, and Bangladesh.

Just as cooks in other countries, Indians are cooking not only beloved family recipes but are also looking for new ideas and recipes. Inspiration comes from other regions of India, the West for baking ideas, to China for noodles, and to Italy for pizza and pasta. Ancient family recipes are also being streamlined to fit into a working family’s lifestyle.

Of his polenta Yotam Ottolenghi says “it is wonderful in a very different way from my father’s polenta, rich and generous and gratifyingly complex. It also offers another proof that rethinking and reinventing beloved dishes isn’t an act of betrayal. There’s always room for more than one version of a great thing.”

The Flavors of India

According to an article published in the Washington Post in 2015, Indian food is so good because of “the way flavors rub up against each other.” In the article titled “Scientists Figured Out What Makes Indian Food so Delicious,” they reported on the scientific analysis of the chemical compounds found in Indian spices to explain what makes this cuisine so compelling.

In addition to the eternal quest for flavor, most home cooks keep an eye on the healthfulness of the food they are serving to their family. India has a long tradition of vegetarian diets and the influence of the Ayurvedic system of medicine on cuisine. This prescribing of food is done to keep the body healthy. Indian cuisine is a Godsend to anyone vegetarian, vegan, or needs to avoid gluten or simple carbs.

Ayurveda is a tradition based on ancient writings that focuses on holistic physical and mental health. By these principles, it is recommended that each dish includes six elements of taste: bitter, heat, pungent, salty, sour, and sweet. Here are some of the foods that lend their flavors to these elements:

India is the world’s largest producer and consumer of chilies. The peppers used depends on what is grown locally. Heat is added to dishes, often using both fresh green, and dried red chilies.

If Indian small green chilies are not available, use Serranos for moderate heat and green Thai chilies for a little more of a kick. Jalapeños also work as a last option.

The souring agent Indian cooks use depends on what is available locally:

Jaggery (gur, bellam, chakkara) is the most popular sweetener in India, though white sugar is making its inroads. Made from cane, date, or toddy palm, the sugar is not separated from the molasses, so it has a moist, deep brown color. Jaggery is used in sweets, to balance curries, as medicine, and in dishes offered to the gods during Hindu ceremonies.

Opinions about typical Indian food vary, but certain essential dishes are loved throughout the country. Of course, each dish will be spiced with the blend popular in that region.

Most regions has some version of the following dishes:

Indian meals are composed with an eye to the six Ayurvedic elements. Dishes are famous for a sophisticated balance of spices, creating crave-able food dominated by vegetables, grains, pulses, eggs, and paneer (a fresh Indian cheese). Meat, poultry, and seafood often play a minor role, if at all.

Unlike in the West, Indian meals are not often served in courses. The exception to this would be for meals in West Bengal or restaurants catering to Westerners.

One obvious way to talk about traditional dishes is to divide India into North and South. Here is a representative example of popular dishes in each region. Please note that the state of Maharashtra (Mumbai/Bombay is the largest city) is in central India, and I have arbitrarily included it in the North Indian category.

From the Mughals, North Indians learned to make rice pilaf and biryani, an elaborate dish of rice and meat. The Mughals refined cooking became palace cooking. And the dominant influence in the North. In the tropical South the food is hotter and seafood dominates the coastal diet. The treasured fruit of the coconut palm yields coconut milk for curries and coconut water for toddy, a fermented beverage. From North to South, India offers an endless varied feast befitting its varied geography and multicultural heritage.

Paneer toasty: A grilled sandwich stuffed with paneer and chutney.

Dishes based on a fermented batter made from rice, and lentils are very popular. This batter is used to make idlis, little steamed cakes, dosas, a crisp thin crepe, and uttapam, a thick pancake mixed with spices and vegetables.

Appam: A fermented rice and coconut milk batter eaten with a vegetable or meat stew.

Upma: A thick porridge made from cream of wheat or ground semolina.

I have combined these two meals because most dishes are eaten either for lunch or dinner. The core of a typical Indian dinner (or lunch) is rice, or a flatbread, and a lentil stew (dal).

There will also be a vegetarian stew, and if non-vegetarian, a meat, chicken, or seafood curry. Pickle (achar), papad (a thin round “chip” made from chickpea flour, and chutney round out the meal.

If you aren’t familiar with a thali, it’s a way of eating Indian food. A large plate filled with several small bowls called katoris containing food is served together. Everything is compartmentalized like a bento. The type of food served is dictated by the region and religious holidays. For example, I grew up on the West coast of India and the thalis often contain coconut, meat, and seafood. In the North, where my dad’s from, thalis served at his parent’s home were vegetarian and rich in dairy. Of course, you can skip all the rules and make your own thalis with your favorite dishes.

Nik Sharma in This is A Cook-Letter

Biryani: According to the Travel Food Atlas, biryani is one of the best Indian dishes. It is a layered rice and meat or poultry dish (though sometimes vegetarian) that has its origins in North India. Still, it is made all over India using the favored spices and ingredients of the region.

Bombay sandwich: Is made with thin slices of tomatoes, potatoes, cucumbers, beets and moistened with green chutney.

Do pyaza (two onions): A chicken, mutton, or paneer curry made from caramelized onions and spices.

Korma or qorma: A dish of meat or vegetables braised with yogurt (dahi) or cream, water or stock, and spices to produce a thick sauce or gravy.

Pav bhaji: A spiced mixture of mashed vegetables in a thick gravy served with a soft white wheat roll.

Rogan josh: A lamb curry with origins in Persia, thus a Mughlai-influenced dish of the North. Mutton is slow-cooked in spices and a rich gravy.

Appam: A fermented rice and coconut milk batter eaten with a vegetable or meat stew.

Coconut lamb curry: A lamb cooked in a rich coconut milk sauce flavored with the warm spices of the South.

Goan Crab Masala: A crab dish cooked in a spicy curry of tomato, onion, and coconut.

Vindaloo: Traditionally made with pork, but now often chicken, a spicy-sweet and sour curry. The red sauce has more than its share of dried red chilies, the spices of Goa, and is balanced with vinegar.

Here are some basic side dishes found on many Indian tables. And each region has its particular variation that rounds out a meal:

Home-cooked Indian food is healthy, balanced, comforting, and exquisite. The explosion of flavors from spices and herbs makes you forget about butter, cream, and even meat. Here are Mrs. Gupta’s tips on Mamta's Kitchen for reducing calories in your cooking:

Visit my glossary of Indian food terms for translations you may need:

English to Hindi & Hindi to English

Other Articles About Indian Food